The Birth of a Legend—Sloppy Joe’s Bar 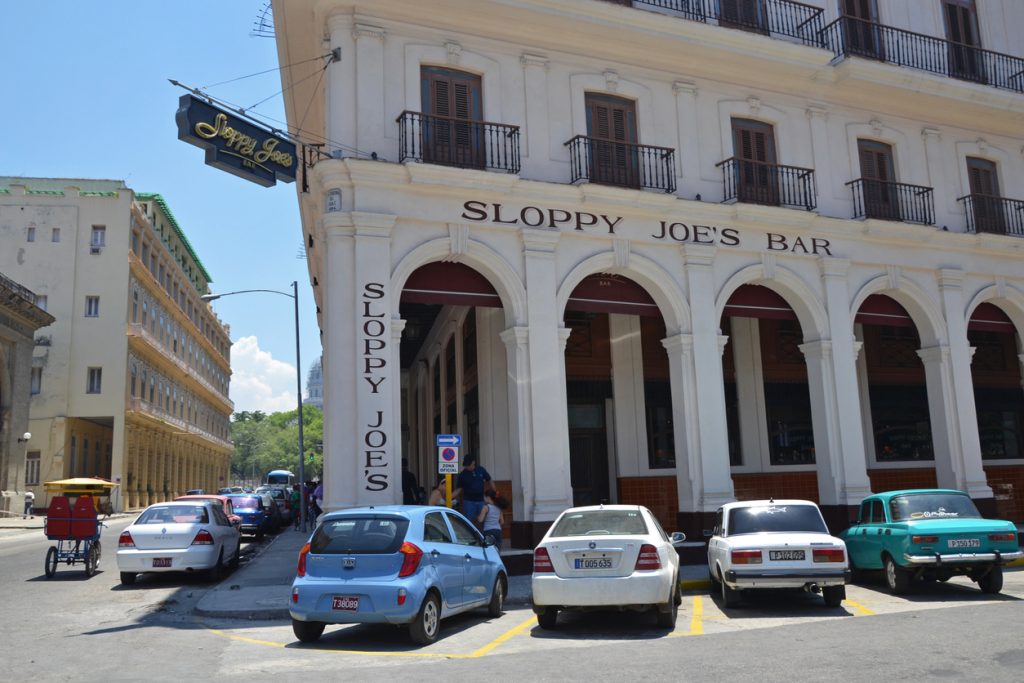 The Birth of a Legend—Sloppy Joe’s Bar

In the hot days of July, life in Key West used to slow down to a sleepy crawl. With the humidity high and afternoon temps reaching for the 90s, whispering ceiling fans and sweating cocktail glasses were the biggest attractions on the island. Now, air-conditioned spaces are plentiful and mid-summer activity reaches an almost frenetic pace.

The fun begins with 4th of July celebrations that coincide with the cool creaminess of the Key Lime Pie Festival. The sweet treats and fireworks are immediately followed by the Underwater Music Festival, then Hemingway Days, zany Christmas in July festivities, the always exciting 2-day Lobster Mini-season, and many other July happenings large and small that keep the hot fun in the summertime coming.

But despite the numerous attractions on tap at the peak of the island summer, there are still the traditionalists (Or folks with good sense?) who know that the place to be on a July afternoon is on a stool or at a table in the cool shadows of a favorite watering hole. That’s why, in this summer edition of the Bascom Grooms Key West Blog, we are paying tribute to tradition with a look at the history of a legendary island hot weather retreat that has become a Key West icon—Sloppy Joe’s Bar.

When Havana was Hopping

The story of Sloppy Joe’s begins in Havana, Cuba during the days of prohibition (1920–1933) when American drinkers had to resort to a variety of strategies to slake their thirst for booze. One way to do it was by taking a trip to Havana, where drinking, gambling, and all the associated fun times were in full swing. Especially in the winter, the influx of American tourists had the town jumping. In those days, the Oriental Park Racetrack in the Marianao Municipality of Havana was the place to see and be seen among the elites wintering in Cuba.

Founded in 1915 and operated by the Havana-American Jockey Club of Cuba, Oriental was the only track in pre-Castro Cuba. American owners would bring their horses to race at Oriental during the winter when most stateside tracks were closed. Boxing matches and automobile races were also featured at the venue. Many members of the American and European wealthy classes as well as celebrities performing at the nearby Tropicana Club or vacationing in Cuba would patronize the track and associated casino.

In addition to a day at the races, Havana offered 3 other fashionable stops for food and refreshments:

El Floridita
Opened in 1817 and still operating today, El Floridita seafood restaurant and cocktail bar on Calle Obispo in Old Havana is known as “la cuna del daiquiri” or the cradle of the daiquiri. The tasty frozen drink was invented by Catalan immigrant and bartender Constantino Ribalaigua Vert, who became the owner of El Floridita in 1918.

Bodega La Complaciente
Bodega La Complaciente, renamed Casa Martínez in 1942 by new owner Angel Martínez, is said to be the birthplace of the mojito and was a favorite of such celebrity artists as writer Gabriel García Márquez, the poet Pablo Neruda, and jazz singer Nat King Cole. The Bodega also served typical Cuban fare including boiled rice, black beans, manioc, roasted pig shank, pork rinds, and toasted fried plantains. The place became so famous that copies under the same name have been opened in countries around the world.

Sloppy Joe’s
The third joint became the original Sloppy Joe’s. It started out as a small bodega on the ground floor of a grand building on the corner of Zulueta and Animas streets in the historic center of Havana. The place was owned by José Garcia, a Spanish immigrant who arrived in Cuba and worked as a barman in Havana. Garcia then went stateside to work in New Orleans and Miami before returning to Cuba in 1918 and shortly thereafter buying a grocery store and warehouse with the intention of opening his own bar. It became known for top-quality liquor, fresh seafood on ice, and a splendid mahogany bar and bottle cabinet, the longest in Cuba and perhaps the world at the time.

Several stories have evolved around the origin of the name that is now internationally known and generally associated with a bar located on the corner of Greene and Duval streets in Old Town Key West. In one version, reported in a 1932 cocktail manual from the Havana bar, old friends of Garcia who were visiting Cuba from the States remarked on the general condition of the establishment and the dirty water on the floor (from melted ice). Being Americans, they called the owner Joe, and started to refer to the place as Sloppy Joe’s, a name that soon caught on.

Another story, reported in a 1928 book about the Cuban drinking scene, has the detailed ring of authenticity. Apparently, Mr. Garcia had a disagreement with one Pop Roberds, proprietor of the Havana Evening News, because Joe refused to place ads in the News. Roberds proceeded to write an editorial that included a suggestion to the newly-formed Havana City Sanitation Commission that an inspection was needed at “a place on Zuletta Street which should be called Sloppy Joe’s”.

Joe Garcia was privately insulted, but as a businessman, he realized that any publicity was good publicity and soon set about leveraging the infamy of his joint. He expanded the bar and cut the price of drinks in half from the standard 75 cents of the time. People packed in, and the legend of Sloppy Joe’s began when Garcia put up a sign with the name and advertised in the Evening News (Roberds became a regular at the bar). Garcia soon had to expand the space again as New York reporters and other writers spread the news of the Havana bar that delivered “the biggest drink of the best liquor for the least money” (New York World, August 31, 1923).

Until it closed with the advent of the 1959 Communist revolution in Cuba, Sloppy Joe’s was a Havana hot spot. Clients ranged from Hollywood stars like Clark Gable, John Wayne, and Spencer Tracy to Frank Sinatra and boxer Joe Louis. B-29 crews operating out of Cambric Army Air Field near Cayuga, Cuba during the 1940s, visiting big game fishermen, fishing charter captains and crew members, golf and tennis stars, and plenty of regular Joes both Cuban and foreign all drank at Sloppy Joe’s.

For more than 4 decades Sloppy Joe’s welcomed Havana visitors with over 80 cocktails and a house brand of 12-year-old rum. Throughout the 1940s and 1950s, the joint was on the A-list with American celebrities and the many tourists who wanted to mingle with them. In its heyday, Joe’s was described by the Los Angeles Times as “one of the most famous bars in the world” with “almost the status of a shrine.” Closed and left to go to ruin during the Castro years, an extensive renovation effort recently returned Sloppy Joe’s Havana to its original glory. The bar reopened in 2013 to once again welcome adventurous tourists and lovers of history served up with a round of drinks.

A Key West Take on the Original

Ernest Hemingway made his home in Key West from 1928–1938 and wrote classics including Death in the Afternoon, The Green Hills of Africa, and To Have and Have Not while living on the island. A serious drinker and big-game fisherman, Hemingway struck up a friendship with local speak-easy owner, charter boat captain, and rum runner Josie Russell. After prohibition ended in 1933, Russell went legal and opened the Silver Slipper Saloon at 428 Greene Street, where Hemingway would meet his friends for drinks every afternoon.

Joe Russell and Hemingway became good buddies, and in To Have and Have Not, Hemingway immortalized Russel as Freddie, owner of Freddy’s Bar and the boat Queen Conch. In real life, Hemingway would charter Russell’s boat and the pair would make marlin fishing (and prohibition-era rum-running) trips out to Cuba. Of course, the men would hit Sloppy Joe’s while in Havana, and it was these visits that prompted Hemingway’s suggestion that Russell should change the name of his bar.

When rent in the original location was raised from $3 to $4 dollars per week in May of 1937, Joe and his customers picked up their drinks, stools, and tables, and Sloppy Joe’s moved down the street to 201 Duval where it can be found today. The old building became Captain Tony’s Saloon, and Hemingway was not shy about having a few drinks there on frequent occasions.

The debate still runs on over which bar can claim the title of the original Key West Sloppy Joe’s. If physical location is the sole criteria, a preponderance of evidence supports the 428 Greene Street location for the honor of being the stateside namesake of the legendary Havana saloon.

Live Your Own Legend in Island Paradise

The team at Bascom Grooms Real Estate can help you explore the possibility of joining the ranks of legends who have made Key West their island home. Exotic tropical beauty and the unique, quirky flavor of life in Key West attracted Hemingway and many other big personalities and natural fonts of creative energy to this tiny island. These are still prominent features here, and life in Key West is endlessly entertaining.

If you are interested in buying or selling property in the Lower Keys, consider putting the local experts on your side. Bascom is a 4th-generation conch who has kept his agency on course as a small, boutique company and true Key West hometown business with a reputation built on attention to detail, personalized service, and high-quality client experiences. In 23 years of handling Key West real estate transactions, Bascom Grooms Real Estate has earned a place as one of the island’s top-producing, most respected real estate agencies.