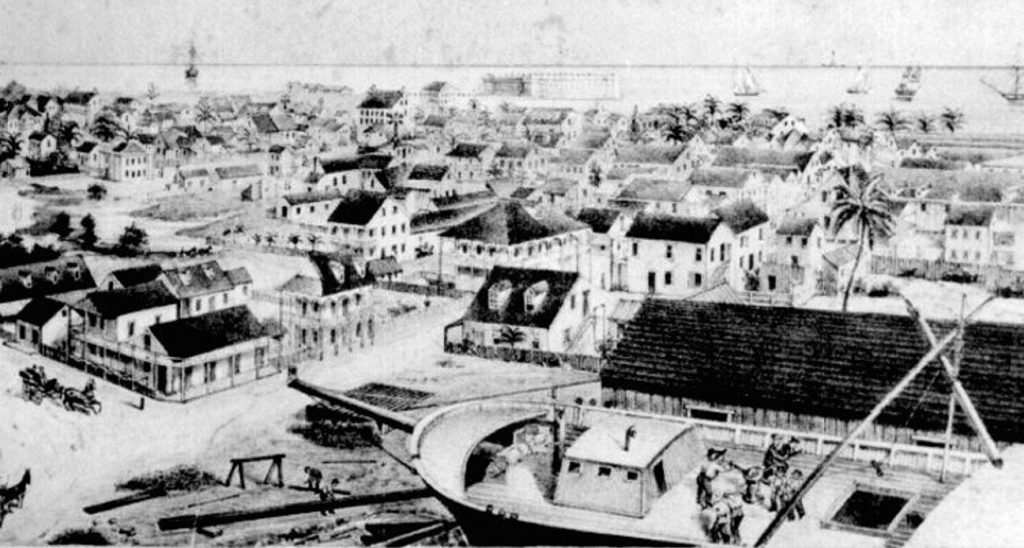 Next month, Key West is celebrating 200 years as America’s Southernmost City, and the town is already busy with plans and preview events. Its an exciting time to be a conch, and local attendance at the celebration’s many events is projected to be very strong.

Key Westers are inviting everyone to join the fun, and the week of March 19th through the 26th will be a fantastic time for the upwards of 5,000 visitors who are expected to be in town for the festivities.

Whether you are frequent traveler to America’s Caribbean Paradise or considering your first trip to our eclectic and entertaining little island city, the bicentennial celebration offers a great reason to come down and see why Key West has always been such a wonderful place to call home.

Early Times in The Keys

The Florida Keys are the historic home of several First People’s communities, with the Calusa being the principal indigenous culture identified with region going back to 800 CE. The abundance of food and materials on land and in the sea made the islands very hospitable to such early settlement

Later, inland Florida tribes such as the Creek and Seminole took advantage of the Keys for hunting and gathering activities, trading, and salvaging from ships caught by the treacherous currents, shallow reefs, and frequent storms of the Florida Straits.

An established Spanish presence in the Florida Keys is thought to have begun around the time explorer and conquistador Ponce de Leon arrived in 1513 and began to explore the territory that is now Florida.

The Caribbean waters between Cuba and Florida and the shores of the Southern Florida coastline were already strategically important sea lanes and staging areas for treasure-laden Spanish galleons on their passage from South and Central America back to Spain. Spanish colonists soon settled in the Keys to exploit sea turtles and other marine food resources and harvest wood for building materials and ship repair.

A Brief History of the Island City

The modern history of Key West began December 20, 1821 when John W. Simonton of Mobile, Alabama purchased the island from Juan Pablo Salas, who had acquired it in 1815 from Don Juan de Estrada, Spanish governor of Florida, as a Land Grant reward for service to the Spanish Crown.

Simonton recognized the potential value of a settlement on the island to the developing United States as Key West’s natural harbor was the deepest port between New Orleans and Norfolk, Virginia. Immediately after the purchase, Simonton sold shares to 4 partners, and they took possession of Key West on January 19, 1822.

The group immediately began developing a permanent settlement, clearing land and erecting buildings, but their ownership of Key West proved to be short-lived when Lieutenant Matthew C. Perry sailed into the harbor on March 25, 1822 with orders to claim the island as a United States possession. On that day, Perry hoisted the U.S. flag over the island, naming it Thompson’s Island. Given in honor of the then Secretary of the Navy, the name did not stick for long.

At the time, the needs of maritime transport between ports on the Gulf of Mexico and the U.S. Northeast, trade with the Caribbean Islands, and control of the piracy that was rampant in the nearby waters argued for the importance of Key West to the young United States. According to an 1835 description written by William Adee Whitehead, younger brother of Simonton’s partner John Whitehead, Commodore Daniel Todd Patterson arrived in February of 1823 to survey the coast and harbor of Key West for the U.S. government.

In addition to the general strategic importance of Key West, the government was intent on having the lucrative proceeds of all ship salvaging, or wrecking, conducted in U.S. waters go through customs entry, court adjudication, and auction in Key West rather than being taken to Bahama or other Caribbean destinations.

With increased ship traffic and the poor navigation technology of the day, the uncharted reefs of the Florida Barrier Reef band that makes up the northern boundary of the Florida Strait would often claim ships on a weekly basis. A large wrecking fleet operated out of Key West and the neighboring Keys, and the high volume of trade and income generated made wrecking the most profitable local industry at the time.

An U.S. Customs Department inspector and collector arrived on the island in April, 1823 and Key West began operating as a Port of Entry. Government ships also arrived that year, bringing a variety of supplies and materials, and Key West was designated as a U.S. Naval Depot and Station. Key West then became an official U.S. Port of Entry in 1828.

With the presence of the Navy, defense activities related to the Civil War such as the construction of Fort Zachary Taylor, and trade from Cuba and other islands, Key West quickly became Florida’s leading port and a small but busy city.

The Party is Underway

The 200 years of colorful history that have passed since Lieutenant Perry’s planting of the Stars and Stripes on what was then a barren, sandy island are being celebrated with a multitude of both festive and educational events. On tap are exhibitions, concerts, film showings, a time capsule dedication, a conch baseball retrospective, a Key West Bicentennial Celebratory Gala at the Oldest House Museum, and much more.

The celebration launched on Friday January 21st with a reception unveiling the Key West 200 exhibit in the foyer and two first-floor galleries at the Key West Art & Historical Society’s Custom House Museum.

Organized by decade, the exhibit presents memorabilia commemorating indigenous cultures and chronicling important historical eras and influences from the Civil War through the Great Depression and World War II as well as the changing island economy through the days of sponging, cigar making, and the construction of the Overseas Railway.

Exhibit curator Cori Convertito notes that “Museum visitors who imagine that Key West has always been a tourist destination will be delighted to discover that tourism is only a tiny portion of the story.  The true breadth, depth and diversity of this island is so much more – a remarkably captivating history to celebrate.”

The celebration culminates in The Key West Heritage Festival beginning at 4 p.m. on Friday, March 25 at Mallory Square with a reenactment of Lieutenant Perry’s planting of the United States flag.

The Heritage Festival continues Saturday, March 26th at a family-friendly Heritage Day celebration in Truman Waterfront Park. There will be lots to enjoy including continuous stage performances featuring music from local performers in addition to historic talks, a market of local vendors and artists along with displays by non-profit organizations, and an amazing, eco-friendly drone firework show in the evening to round out the day.

Grab the Opportunity of a Lifetime in Key West

Take advantage of an opportunity 200 years in the making and join us to enjoy a uniquely Key West Bicentennial Celebration. The people, parties, and other events are sure to be as colorful as an island sunset. And it’s the perfect time of year to go south and shake off the winter chill.

The folks here at Bascom Grooms Real Estate are looking forward to toasting our island paradise and its two centuries of perseverance, peculiarities, and popularity with adventurers and treasure hunters of all types. Key West real estate and the beautiful Key West properties we help our clients find everyday have replaced pirate gold as our island treasure. Get in touch with us to begin your own treasure hunt.